During the period from the 1920’s through the 1950’s, the City of Boca Raton was well known as simply the home of the Boca Raton Resort & Club, a 356 acre facility, originally built by Addison Mizner in 1926. The Resort was a destination, in the same category as Palm Beach’s Breakers Resort and the Biltmore in Coral Gables. The town of Boca Raton mostly housed residents who worked or provided services for the club.

Arthur Vining Davis purchased the Resort in 1956—along with over 1,000 acres of adjacent land. Mr. Davis is undoubtedly best known as the founder and chairman of the Aluminum Company of America (Alcoa), but he was also a major Florida developer. His company, Arvida (formed from the first two letters of his names), owned close to 1/8 of Dade County. He also owned 25,000 acres in Broward County as well as property in Palm Beach and other counties.

In 1958, Mr. Davis had a personal need for cash, and he decided to sell off part of his estimated 100,000 acres of land holdings in Florida. The first tract selected to develop and sell was considered the jewel of the Arthur Vining Davis Florida empire. Today, this approximate 450-acre property is known as the pristine Royal Palm Yacht and Country Club.

This site embraced a nationally-known polo field that was a focal point for Palm Beach society with grandstands and stables for overnight housing of polo ponies. In addition, there was a well-kept 9-hole golf course. It was an area that could not be encroached upon, as it was bounded on the north by the historic Boca Raton Resort & Club, on the east by the intracoastal waterway, on the south by the Hillsboro River and on the west by Federal Highway.

Work on the development commenced in 1959. Arvida imposed stringent architectural and building standards. Utilities were underground. All roofs were to be white. Lot sizes were larger than customary in other comparable developments. Strict owner obligations were established. These are still presently embodied in the bylaws of the Royal Palm Improvement Association.

Royal Palm takes its name from the stately royal palms lining Camino Real on its northern border. It was the first Boca Raton neighborhood with guarded entry gates. Home sites were priced from $10,000 to $45,000, and most fronted either water or the golf course. Even Arvida official expressed surprise when the most expensive lots sold out first. The Royal Palm Yacht and Country Club set a new standard for Boca Raton.

Since 1959, Royal Palm has undergone many changes. The community was originally developed with one-story Bermuda-style cottages. Many of these have been redeveloped into two-story homes, with a substantial increase in square feet and other amenities. Some residents have purchased adjacent lots, so today there are fewer homes (688) than when Royal Palm was first completed. 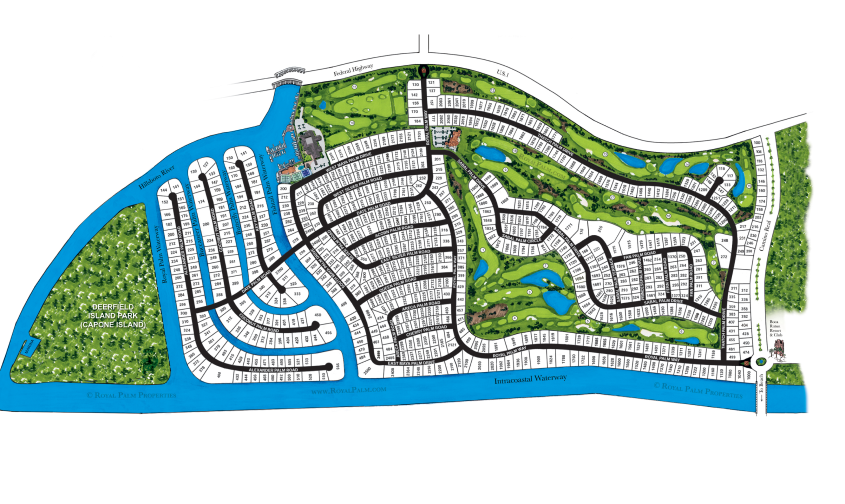